We’ve had our Samsung Frame TV 55” for about a year and a half now, and shortly after we welcomed baby boy, we went for a (first ever) master bedroom tv too. Because well, he and I spent a whole lot more time lounging in our bed than going downstairs, and now it’s where I fold our laundry and listen to Chip & Jo in the background. It’s honestly just a gift to be able to hear other adults throughout the week while being a full-time at-home mama. 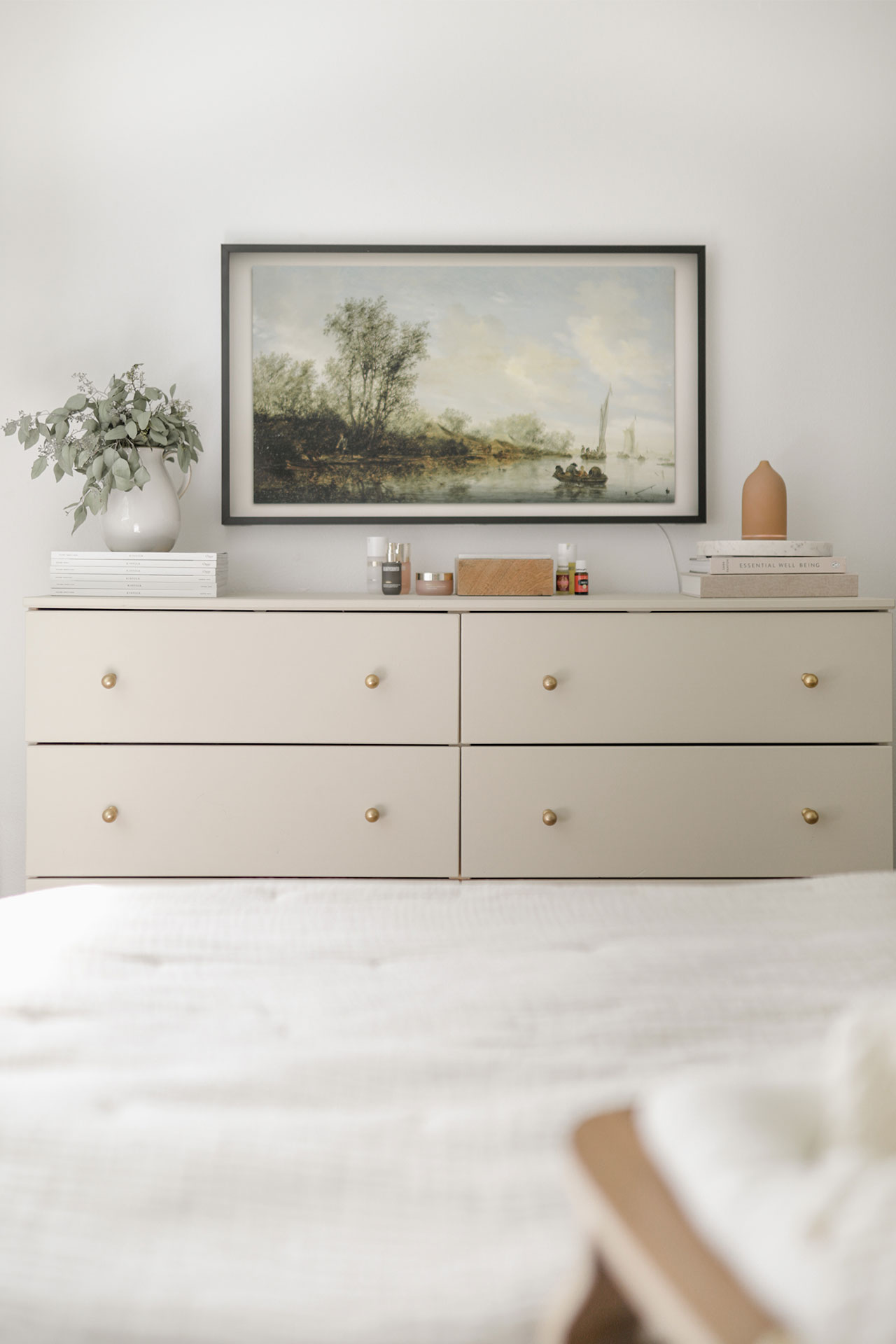 I digress. We actually had a plain-ol-normal tv for our first couple years of marriage, then as our girls were toddlers, we got rid of tv completely. We went a full year and some change without, and then we bought our first house, and we realized how dark and dreary winters were. I don’t know. We just actually really like watching shows. Don’t sue us. It’s a thing we like to do!

So anyway, I had seen the Samsung Frame tv in a few random ads (before they came in like a storm on Instagram). And I thought it was extremely far-fetched; certainly not something we’d ever have, but it was really rad, and I really wanted it eventually. Well one day, I had been randomly browsing and stumbled upon a crazy sale and bam, it worked out, and we were able to get it! Okay so why… what’s the big deal about this tv? Well, it’s a smart tv. You don’t need any extra cable box, or console (like no need for apple tv box or roku type thing). You can download apps like Spotify, YouTube, or PrimeTV and play music, and the best part — you don’t just have a black rectangle on your wall at all times. You can stream anything you want to watch/listen, but you can also have art on the screen, change out the frame color, and it sits flush against the wall making it look like just, literal framed art. It’s amazing. You can add your own images, you can download art, you can use the included art, you can sign up for a Samsung account, which includes thousands of art and photography options. Honestly the options are endless.

For a while, I used the included Samsung collection, and then I opted for the $5/month extra art collections… thennnn I realized you could add your own art, and I was sooo happy. I downloaded some super pretty vintage art (linked below), to my computer/phone/icloud, and from there, I took the downloads to my tv.

I downloaded the SmartThings App on my iPhone, and then signed up within the app. I made “rooms,” in which we had smart things… so, smart tv — but if you have other smart objects like speakers, or thermostats etc., you can include those in there as well. I guess our home isn’t super intelligent, but we’re working on it 😉 I synced our tv with the app by following the instructions on both screens, and from there, I followed the steps to add in the art and set it for my screen.

It’s been so fun to change up my tv art, as it’s the focal point of our living room gallery wall. I like to change it with the seasons, sometimes with my mood, sometimes just because. Sometimes I only change the mat color. I also recently took off my beige bezels to reveal the black frame, and I love that change as well.

Really what I love the most is the freedom for so much customization. I enjoy changing up my space and, with the frame tv being the center of so much, having the ability to adjust so much is just really rad. So with the tv, it’s thin and can sit flush against the wall as I mentioned earlier, and that’s because all the technical parts of it are hidden away in this black box, connected to the tv screen by a very thin, clear cord that is very long and can be hidden super easily. Currently ours is just tucked into the basket under our console table, however we could even have it stored in the pantry around the corner. It’s that long and discreet. For now, the basket doubles for hiding the multiple outlets on the wall behind it, so that works. I’ve also seen many hide the cord and box within/behind the wall. We tried and failed because the wall our tv is on isn’t hollow, buuuuut maybe one day we’ll figure it out, ha! Anyways…. all in all, yes, we really do love the dang tv. So much so, we bought a second a full year later. We went from no tv to two in two years, so I feel like I can give my honest opinion and like, it counts for something… or maybe it doesn’t, but here’s what you’re really here for anyways… all the pretty art! Click any of the links below and grab your own pretty tv art. You’ll love it, I’m sure! Moving to a Rental Home x Decorating with Loloi We have been camper living for six months... wow! I honesty can't believe it. When we…
Our Kin & HomeFebruary 9, 2022 Married and mothering three (plus one more soon), saved by Grace. Sharing photography, homemaking, and motherhood. Always seeking to find beauty in the mundane, simplifying, and slowing down. Thank you for being here!

Enjoy journal entries, recipes, current musings, and more when you sign up. Promise I don’t spam ya!